In our body, Manganese is a trace mineral, which means that you only need small amounts of this nutrient for your body to function properly. The chemical formula of Manganese is Mn.

Mn is primarily important for the synthesis of superoxide dismutase (SOD), one of the key antioxidants in your body. What’s less known is that Mn also takes part in cholesterol synthesis by the liver.

At any given time, your body contains no more than 20 milligrams of this mineral, most of which present in the pancreas, kidneys, liver, and bone tissue.

The organs that are affected the most with manganese deficiency are the brain and the nervous system. Other organs include, the bones and joints. Sometimes, manganese can even lead to fertility issues. Manganese deficiency may also cause deafness, tinnitus, and dizziness. This trace element is important for treating diabetes and multiple sclerosis.

The biological function of this essential element is realized via its active compound, manganese superoxide dismutase. This enzyme is included in many important bodily functions, such as bone formation, wound healing, and proper metabolism of nutrients.

Even though Mn is important, there is no recommended dietary allowance (RDA) when it comes to it. Some guidelines recommend taking about 5 mg daily for osteoporosis [1].

The health of your bones goes hand in hand with manganese. Manganese improves the mineral density of the bones, including that of the spine [2].

Post-menopausal women should pay special attention to this nutrient, as they begin to suffer from osteoporosis and other bone related problem at this age.

As indicated earlier, manganese is present in higher concentrations in the pancreas. There, manganese helps the normal operation of this organ, which is also responsible for the production of one of the most important hormones, insulin.

Researchers have found that people with diabetes type II have lower manganese levels in the pancreas. This is a sort of an early warning sign, and you should do something with regard to manganese supplementation if you have diabetes or insulin resistance.

In addition, manganese regulates the process of gluconeogenesis, where the liver produces sugar directly from other types of foods, like amino-acids [3].

Manganese is a powerful antioxidant [4]. It helps fight the harmful activity of free radicals, preventing them from damaging the cellular structure of your body. Eating manganese-rich foods or taking manganese in a form of a supplement can help you diminish the risks of many diseases related to free radical damage.

This benefit is closely related to the one before. Manganese helps reduce inflammation by helping the production of superoxide dismutase (SOD). This substance is a very powerful naturally occurring antioxidant in your body [5], and manganese is one of the metallic cofactors responsible for its production. As a result, manganese is an important trace elements for people with rheumatoid arthritis, and other inflammatory conditions.

Manganese is very much needed to speed up the metabolic processes of your body. Apart from helping calcium absorption, it can help your body better metabolize carbs [6],  and proteins, as well as aid the proper absorption of vitamin E and vitamin B.

Manganese can be useful for brain and mental health. The explanation is likely connected to its antioxidative function via the Mn-SOD compound. In addition to this protective role, Manganese actively binds with neuro-transmitting chemicals in the brain, facilitating the transmission of electrical impulses in the nerve cells, thus improving the cognitive function of the brain [8].  Low manganese levels have been detected in people with high levels of epileptic seizures, so this nutrient may be important in this case as well.

As it is with other trace elements, there is a delicate balance and too much Mn, can be equally bad as too little.

Consult with your doctor for the proper dosage of Manganese, but it is generally accepted that, for adults, up to 11 mg of Mn per day taken orally is safe. However, people with liver disease should avoid taking manganese supplementation [9].

People with anemia also need to be careful, as they tend to absorb more Mn than others.

The concentrations of this trace element varies in different types of foods. In larger quantities, Manganese can be found in some spices, like cloves, saffron, cardamom, ginger, cinnamon, parsley, tarragon, thyme, turmeric, and others.

For example, in 100 grams of ground cloves, there is about 30 milligrams of Mn, which is the most among all spices [10].

You can and should add some of the above nutrients to you favorite juices and smoothies, and this is by far the best way of getting Manganese in a natural way.

Fruits and vegetables are not overly abundant a source of Mn, but you can still get enough, that is, if you don’t avoid them in your diet.

Manganese Rich Juice: Blueberry plus Broccoli plus Tomato plus Carrot

Mix in a juicer and extract the juice. Drink fresh. Add some lemon juice to improve the taste and enjoy! 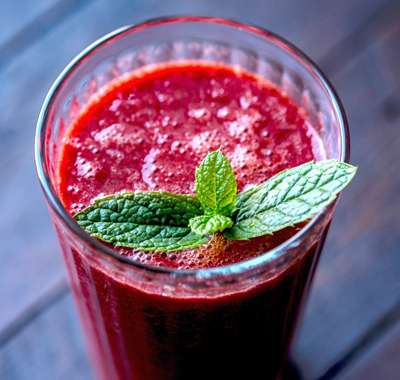 Strawberry juice and bell pepper is a great combination to strengthen the immune system and provide enough antioxidants to the body. It is also rich in Manganese.

Remove the stem and seeds of the bell paper and cut into pieces. Add the strawberries and sweeten with stevia if you have to.

All thing considered, there is really no reason you should be taking supplemental manganese.

The amounts of manganese you get from food, including juicing and making green smoothies should be more than enough.

If you think about supplementation, consult with your physician first . Too much of it can be very harmful, and manganese deficiency is not so common a condition anyways.