Fish and sea food in general are great sources of omega 3 fatty acids. But unfortunately they can be contaminated with pollutants, among which mercury is especially dangerous.

Seafood is a great nutritious source because, among the other things, it contains large quantities of Omega-3 fatty acids. Both Omega-3 and Omega-6 fatty acids are essential for life, but currently the Standard American Diet and similar types of diet deliver too much of the inflammatory Omega-6 compared to the anti-inflammatory Omega-3.  As we said, the Omega 6-fatty acids are not inherently bad, but due to the development of hydrogenated oils used so widely in cooking, the average individual now has too much Omega-6  than their body is accustomed to handling. So, seafood can restore the balance in favor of the much healthier omega 3 fatty acids.

The problem is that many types of seafood accumulate toxins, especially heavy metals like mercury. Mercury is toxic to the peripheral and central nervous systems and poses a risk to normal neurological development in fetuses.

The question is, can we enjoy the benefits of this omega 3 rich food but avoid the danger of mercury poisoning?

It is not always easy to balance the benefits and risks, and certainly it is hard even for the experts in the field. A recent Washington Post article featured a great infographics that can help us make an informed choice and select the food with high omega 3 content and low pollutant concentration. 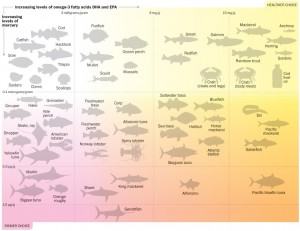 Whatever you do, however, don’t go overboard with your fear of mercury. It is not that bad.

Actually, if you eat fish that contains more selenium than mercury, the mercury won’t be able to inhibit a large number of selenoenzymes in your body and produce harm. And the good news is that most of the fishes you would probably eat, with the exception of shark, swordfish, tilefish, and king mackerel, fall into the category of fishes with more selenium than mercury.

Eating fish and seafood has many benefits mostly attributed to poly-unsaturated fats with long carbon chains from the omega 3 family. These fatty acids are almost exclusively found in fish and reduce the risk of heart disease and stroke and contribute to mood elevation. Omega 3 also improves the neurological development of fetuses. So, be aware of the beneficial and positive function of selenium, and eat more fish.

Please note that mercury is not the only pollutant and some types of fish may contain other harmful substances. Nevertheless, the above infographic is very useful and may be used as a guiding principle for changing your diet toward a much healthier alternative. Obviously, salmon, mackerel, anchovies, herring, sardines, rainbow trout, cod liver oil, and crabs should be on top of your list. On the other hand, this graphics suggests avoiding tuna, shark, swordfish, martin, and similar types.

2 Comments on Omega 3 in Sea Food vs Mercury Content